AST has long-term experience supporting LVC-G systems that began in 1992. Our early experience was primarily in the Constructive Training domain where we provided subcontract support services for the Communications and Electronics Command (CECOM), Software Engineering Directorate (SED), Training, Modeling and Simulations (TMS) Group, located at Fort Leavenworth, Kansas. Our main effort was performed in Leavenworth, Kansas, with additional support provided at remote locations in Orlando, Florida, White Sands Missile Range, New Mexico, Fort Polk, Louisiana, and Fort Irwin, California. Systems supported under this initial contract were primarily constructive simulations such as Janus; the Brigade/Battalion Battle Simulation System (BBS); the Corps Battle Simulation (CBS) for Corps, Echelon Above Corps (EAC), and Divisions; and, the Combat Service Support Training Simulation System (CSSTSS). A major task on this initial contract was to support the setup, staffing of over 90 personnel, and operation of Battle Simulation Centers (BSC) at the 11 TRADOC proponent schools and the Army Special Operation Forces School. We did provide some support services in the live domain for the Instrumentation Systems at the National Training Center; the Combat Maneuver Training Center; the Joint Readiness Training Center; and, the White Sands Missile Range – Test Support Network (WSMR-TSN).

Our support to the LVC-G training domains steadily increased over the years to the point where AST is actively providing support services in all of the domains. The figure below depicts those systems for which we actively provide support:

Constructive Simulation Training - Computer generated (artificial intelligence) humans in a simulated environment
using simulated equipment. An example of this is the use of JCATS representing brigade level entities where the
decision process is driven by real people; operators, commanders, and staffs.

Gaming Training - Human operators interacting with constructive simulations via virtual with live. An example of this
is the use of VBS2 which allows the building of simulated terrain of a units home station or deployed areas; allowing
soldiers to operate in a near-real time environment (first person perspective) learning new convoy drills, or under-
standing how to correctly lay out a vehicle checkpoint in a hostile village, or interacting in a brigade level fight in
JCATS.

In addition to constructive/virtual/gaming support, AST provided training support for a myriad array of digital MCS and the integration into battlefield simulation exercises which provide the execution fidelity during training that Brigade and Battalion commanders and their staff’s desire. AST personnel assisted Reserve Component units in MCS training, systems support, and exercise support and execution, which include: 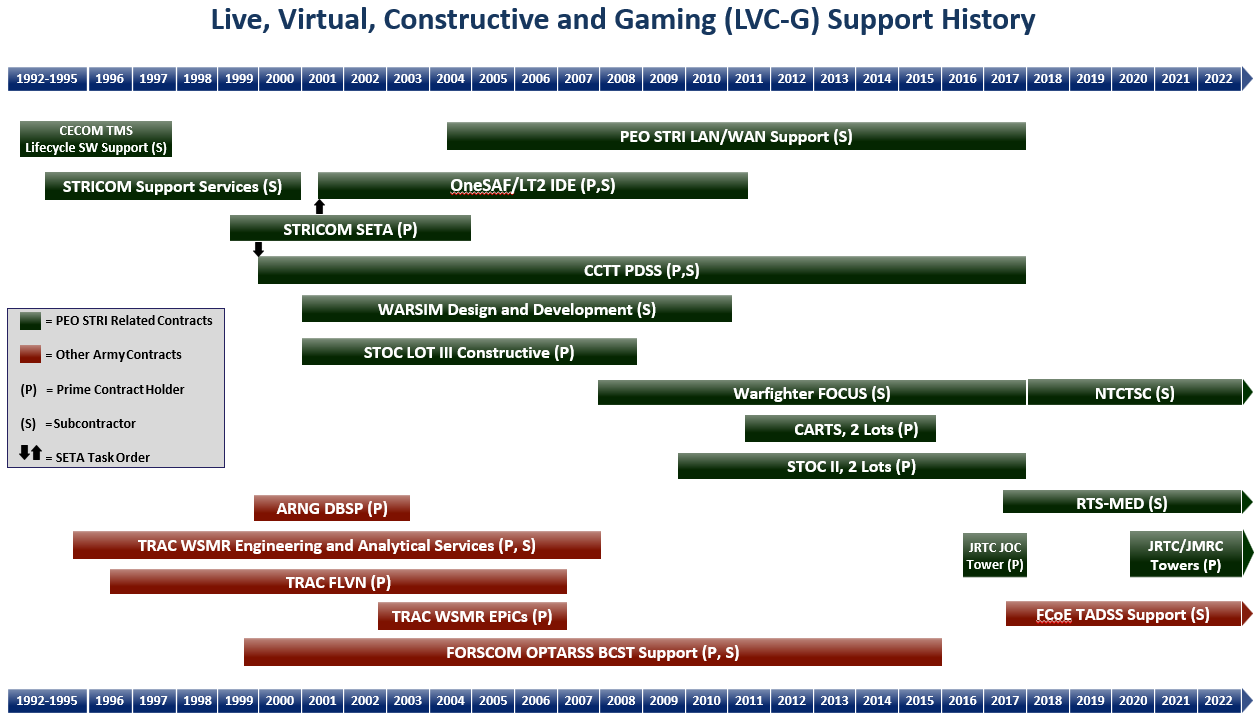